Many moons ago I wrote a post inspired by one of Chuck Wendig’s flash fiction prompts, and I forgot to post it. Oops.

I thought I’d post it anyway. For this particular one we were prompted to write a short piece about a randomly chosen Flickr photo.

Here’s the image I got – an amazing shot by Wolfgang Schrittweiser, titled ‘Devil’s Playground.’ 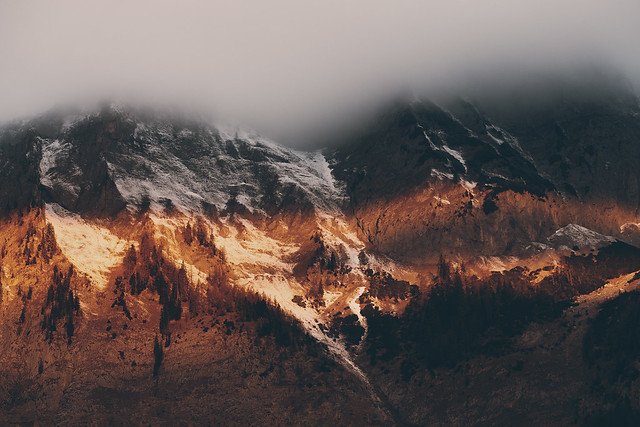 They say the Devil moves in shadow, but that’s not entirely true.

For he was once Lucifer, wasn’t he? One of many stars among the Lord’s infinite constellations. Lucifer. Luce – light.

So yes, he moves in shadow, he is shadow, but he is also blinding, bewitching light. For without one there cannot be the other.

The mountains know this. They sit and wait as he dances over them, his fingers stretching across their faces. Light and dark. Morning and night. Particle and wave. Good and evil. Moving, shifting, endlessly dancing.

Sometimes you’ll hear him laughing – if you share his sense of humor, of course.

Those trees that fall in the forest, when no one is around to hear them? He hears them.

Because he’s the one who knocked them down.

Those howling winds that carry the voices of your long-dead loved ones? Just him humming to himself, a lullaby for lost souls.

Those snowdrifts trailing from the mountain’s ragged edge? The fog that makes you lose your way? Just him sighing up into the heavens, to his old home.

But he knows he can never go home.

And why would he want to return to the stars? It’s cold up there. And boring, with no trees to fell, or cliffs from which to plunge.

But down here? Well, down here it’s a veritable playground for him. A merry-go-round of sinners to encourage and saints to tempt. Of storms to brew and seas to boil.

Oh the Devil moves in shadow, sure. But even the moon has a dark side. And we all have our own shadows to contend with, don’t we?